This is probably the most comfortably designed controller I've ever held. The buttons are nice and big and feel great to press, the weight is good, the sticks feel great like all Nintendo analogue sticks do. HD rumble and motion controls work fine and battery life is worlds ahead of the PS4 controller. The D-pad is a step down from typically Nintendo design though, having no ball underneath the centre, so every direction can be pushed in at once, which can occasionally cause problems, but I've played a ton of Tetris and Shovel Knight with it and it's still pretty solid. The ergonomics are stellar though, to be sure. Feels better than any other controller that I can think of and I think the Xbox one S controller is pretty top notch comfort-wise. Also, with the right Bluetooth controller adapter, it can be used on the PS3 and aside from the six-axis crap not being present it works perfectly. I blasted through a good portion of uncharted with it just to test it. I bought mine used too which I'm normally leery of, but it's really studied and I've had no issues at all. I love it.

Fells a bit more traditional like an Xbox or PS controller. The joy-con seems a bit too easy to click the joystick down on accident while in the heat of battle that was the main reason I got this controller and for a bit more comfort. The only problem I have with button layout is the + key is close to the Home key and the - is close to the capture button and it can be easy to confuse them or not feel comfortably certain you're gonna hit the right one while playing. This is minor though as ur usually looking to pause anyway when going for those buttons and if u hit the wrong one it isn't terrible, also u get better as u use it I'm sure. The joysticks have a lot of room for play yet don't seem to activate until you've moved them about 50% towards the direction you're going. Then the last 50% is where u have the control to manage speed. I.E. if you're trying to walk slowly it feels like you have to move the joystick farther than you should have to before walking begins which leaves less room for control in the stride between walking and running. This may be fixable in some sensitivity settings I'll have to play around. Overall though great controller it feels much better playing Zelda with this over the joy-con.

I was torn between buying this Pro controller or another set of Joy Con controllers + grip. The latter was actually more expensive but naturally, you could turn the Joy Con into two smaller controllers, accommodating more players. However, I went with the Pro Controller and haven't regretted it since. I use my Switch docked 70% of the time and this controller makes gaming on it perfect. The build quality is superb, the buttons are responsive and it just feels premium. I've been using it for about 20-30 hours so I'll be sure to make an update around the 1-month mark (which is when it seems the left joystick craps out on a lot of these controllers). If you play a lot of solo games docked, get this controller. The Joy Con + grip is definitely serviceable, but take your game up a notch with the pro especially if you play games like Splatoon 2. Highly recommended, so far.

Every button on this feels amazing, the controller feels very solid. And built-in battery too is great. I had to get this because I sit about 10ft away from my TV and the joy-cons seem to have trouble at that range. This has a complete solid connection and fixed my issue, but after using it I realized just how uncomfortable the joy-cons are relative to this. If you like using the switch docked a lot it’s definitely worth the buy. And you’ll have two controllers for the split screen as a bonus. I have quite large hands and this feels like it was made for me

Pros
-Feels awesome in the hand
-It's super easy to connect to the Switch
-Comes with HD rumble and NFC reader for amibos
-Battery life is outstanding. Bought this a week ago and still haven't had the need to charge it. (Advertised battery life is 40 hours or so)
-Can be used for gaming in the Switch, PC and even mobiles phones.

Cons
- The left and right triggers are not analogue, meaning that using the control for racing games is not optimal in the PC
- Setting the control for PC gaming can be a bit tricky and if your PC does not have a Bluetooth adapter then you won't be able to use it. The included USB-C cable only brings in power and not data, so the only way to connect the controller to a PC is via Bluetooth.

Overall this is a great controller and I'm really happy with my purchase. And the Cons I mentioned are only present if you intend it to use the controller for PC gaming, which is not the intended use. Not just the triggers but everything about the pro controller is a huge step up from the joy-cons. The buttons are bigger, the analogue sticks give a great grip with your thumbs and the controller feels nice and snug in the hands. The material is much more friendly during longer sessions. That was another gripe I had with the joy-cons; after a period of time, the sticks and triggers would be slippery. I managed it by having a cloth nearby to give it a nice wipe occasionally. Not the case with the pro controller, there is much more friction to it.

It's a must-have accessory for me and I give it a 5 star because I think it's a fantastic controller and fixes every issue I had with the joy-cons. I suppose if there is one thing I would change about it that would have to be the placement of the right analogue stick. Personally, I'd like it above the buttons so the two sticks would be symmetrical but I don't think it merits deducting a star.

I very much wish that the analogue sticks were lined up like they are with the PS systems. Most of the controllers that I've used over the years have had the analogue sticks on the same level, and I much prefer that to have them staggered like the Xbox systems do and the Switch Pro Controller does. However, the comfort improvements with the shape and size of the controller vastly outweigh that problem for me.

I have heard that the dpad on the Switch Pro Controller isn't that great, and some folks end up pressing up or down when they mean to press left or right (or vice versa), but that hasn't been a big problem for me, and there are videos on youtube which show you how to fix that problem. So, it's disappointing that they didn't make a better dpad, but it hasn't been enough of an issue for me to care.

Ultimately, the Switch Pro Controller is so much better for me than any other controller currently on the market that I'm actually using it not only on my Switch, but I'm also using it on the PC, PS3, and PS4. I had to get adapters to get it to work on the PS3 and PS4, but it works, and for me at least, it's a huge improvement. If I had an Xbox of any kind, I'd get the appropriate adapter and be using it there too. Right now, the Switch Pro Controller is the only controller that I use. 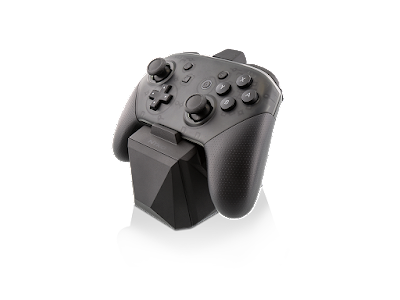 As an interesting bonus, the fact that the Switch Pro Controller has digital triggers actually makes playing games on systems whose official controllers have analog triggers more pleasant (even aside from the comfort improvements that come with the shape of the controller), because all of the games that I play either just treat them as buttons anyway or use them for something like the speed you run at, and I've never wanted to run at anything other than full speed, so having a simple button to press rather than having to push in an analog trigger and make sure that I press it in all the way is a really nice improvement. I'd probably feel differently if I played racing games (which apparently like to use the analogue triggers for their throttle), but for the games that I do play, it's been great. And of course, if you only use the Switch Pro Controller on the Switch, then the way the triggers work is never a problem because that's the way that all of the official Switch controllers are.

This controller is the best you'll get for a switch. It feels very nice in your hand and looks pretty decent too. I think the buttons are responsive, the sticks feel comparable to the other two big guy's controllers. I wish the console supported analogue triggers but for digital triggers these are fine. I prefer the batteries be rechargeable (which these are) as long as they don't lose their ability to hold their charge anytime soon, but so far so good. I wish it were slightly cheaper, but you'll prefer this to the joy cons for sure.
on June 05, 2019