The Eisbären Berlin defied the mammoth program and are only a step away from the ninth ice hockey championship title. The DEL record champion won the third Play-off final game on Monday evening at home against Red Bull Munich with 2: 1 (1: 1, 1: 0, 0: 0) and leads in the best-of-five series 2: 1. For the defending champion it was the fourth game in five days.

Already on Wednesday (7.30 p.m.), the team of coach Serge Aubin in the Munich Olympic ice stadium can choose with a third victory for the master of the DEL season 2021/22. If Red Bull succeeds, the decision will only be made in the final showdown in Berlin a day later.

"Everyone worked very hard. We took everything away in the third third. Hats off to the team," said Eisbären routiner Frank Hördler in magenta. The guests were disappointed. "Both teams play at a high level. In the end we tried everything, but we no longer set up the pressure," said striker Patrick Hager.

In front of 14,200 spectators in the sold -out arena at the Ostbahnhof Zachauk (5th) and Dominik Bokk (39th), the Berliners were successful. Zachary Redmond (7th) scored the gate for the guests. As in the two duels before, both teams gave themselves nothing and acted almost at the same level with two shiny goalkeepers.

The fatigue was not noticeable to the Berliner - on the contrary. The home side looked more bite at the beginning and had the first major chance after 16 seconds due to the Boychuk post shot. A short time later, the Canadian aimed a little better and brought the polar bears into the lead in the lead. Previously, the Munich Benjamin Smith had been banished to the penalty bench.

The Munich team, who had traveled to Berlin with unchanged contingent, seemed to understand the gap as a wake -up call. The preliminary round second now acted much more determined and deservedly came to equalize when Redmond promoted the disc into the corner with a remarkable wrist shot.

Even after that, the guests stayed on the trigger, in this phase the strong goalkeeper Mathias Niederberger kept the Berliners in the game. But Henrik Haukeland on the opposite side could also be characterized again and again. The Agile Boychuk in particular was never completely under control from the Munich back team.

The middle third also fought hard with chances on both sides. Technically, however, one or the other mistake was more to be recognized, the legs became visibly heavier among the players. The Berliners were unlucky that Boychuk injured themselves in a duel and had to go into the cabin. Nevertheless, Bokk's team managed to lead again.

In the final third, the polar bears initially got the better start, but they left an overpowering game unused. Then Red Bull sensed his chance again, the pressure on Berlin grew.

Eisbären Berlin vs. Red Bull Munich 2: 1 - Statistics on the game

del Finale: Game 3 Eisbären Berlin vs. Red Bull Munich- The 2-1 for reading in the live ticker

Conclusion: A defensive masterpiece gives the polar bear the first home win of the series and a matchpuck on Wednesday! Munich had its nose at 40:30 after shots, but only very few attempts by the guests were really dangerous. While Zach Boychuk took the lead early in the first power play, the EHC also got a little outnumbered. The intelligent defensive work of the polar bears became apparent, especially in the final third, when Munich could hardly free itself, let alone gain balance.

60.: That takes too long again. Frederik Tiffels has to wait until Austin Ortega returns from the side.

59.: The gates of the polar bear third are further locked. Henrik Haukeland still doesn't venture off the ice.

59.: Don Jackson takes the time out. Afterwards it will be about winning the bully for his protégés. Otherwise the polar bears will probably play down confidently valuable seconds.

59.: Then a puck loss in the neutral zone, which Henrik Haukeland does not allow to leave his housing.

58.: to play for two and a half minutes. It can't take a long time before Henrik Haukeland leaves the box. Munich is currently a little stuck.

57.: The red bull still does not succeed much. Very strong how the polar bears defend the narrow lead and take more time from the clock!

56.: Yasin Ehliz gets the racket from the blue line to a Redmond degree. The slice hisses past.

55.: But the Upper Bavaria find it difficult to free themselves from the opposing forecheck at all. Once in the opposing third, it looks more fluid.

54.: The series around Kastner, Hager and Schütz is currently getting a lot of ice age, Don Jackson probably chosen as the most promising in the hunt for the balance.

53.: At the moment, Berlin can provide more relief again. The Forecheck already works the entire game over well.

51.: This can still be an exhausting ten minutes for the polar bears. Munich is currently throwing everything into the balance.

50.: Justin Schütz stops on half left. The outside of the crossbar is probably still saving.

49.: When the indoor spokesman announces the compensation of the event, it becomes louder in the ranks.

49.: Munich is currently switching up a gear. Zach Redmond joins the attack and suddenly appears on the left post, but cannot align much from an acute angle.

48.: The final section has so far been almost without interruptions. Of course, this comes towards the leading polar bears.

47.: Tempo rand on Yasin Ehliz! The native of Bad Tölzer puts the disc almost a little too far and therefore sticks to Mathias Niederberger.

45.: The penalty period expires without major chances. After all, the capitals could regenerate a little with the puck on the racket.

44.: With two defenders to hedge, the home side in the power play take it relatively calmly.

43.: again very focused on how the polar bears appear here. Frank Hördler skilfully pushes Trevor Parkes on the outside.

41.: Marcel Noebels just sticks to it. Henrik Haukeland probably appreciates the flatterpck a little wrong and lets it hit the crossbar! The view was actually free.

41.: The final third is running! Instead of Zach Boychuk, Manuel is more back at the Bullykreis, Boychuk seems to have been seriously injured in the unreasonable cross-check from Trevor Parkes.

Third conclusion: The middle section could not build on the playfully outstanding first third, but the intensity remained as usual. The teams were neutralized for a long time, but the polar bears radiated a little more goal. The impression was confirmed shortly before the break when Dominik Bokk decisively dropped a Wissmann-Weitschuss. So far, the problem of the guests is the lack of an offensive punch. Don Jackson has to come up with something for the final section.

39.: The hit counts! The referee takes a lot of time when the decision was announced, seems to enjoy the moment of tension.

39.: The referees look at the scene again. It's about a possible high stick of Dominik Bokk. On the first look, the racket is approximately at the height of the shoulder of Zach Redmond, but not above the height of the latte, which is known to be a reference.

39.: Gate for Eisbären Berlin, 2-1 by Dominik Bokk. The polar bears take the lead again! Kai Wissmann takes a lot of time on the blue line, takes a Schlenker to the right and finds the gap for the shot. Dominik Bokk keeps the trowel in the Bullykreis!

38.: Suddenly Maxi Daubner comes to the end in the slot with the backhand! There, teammates and opponents had only focused on the gang and completely disregarded the Deggendorfer, which was coated against.

34.: Small punishment (2 minutes) for Frans Nielsen (Eisbären Berlin). Instead, frans Nielsen has to get off the ice on the other hand because of legs! There is nothing to shake about this punishment, of course there is still a jelly pipe concert from the fans.

33.: Two polar bears suddenly run towards a Munich one! Zach Boychuk places over to Leo Pföderl in front of the box. Maximilian Daubner lies down on the ice, but the renewed cross pass to Boychuk still arrives! The Canadian cannot use the pass on the long corner, but is also decisively disturbed by Trevor Parkes. Parkes should not have complained about a punishment!

32.: Berlin at the moment it is better to build pressure. The physical presence in the duels in the gang helps.

31.: Marcel Noebels tries to conclude from the rotation and is stopped by Andrew Macwilliam. Afterwards there is a slight scramble.

30.: Only Frank Mauer leaves a good opportunity, then the polar bears set to the two-to-two. Giovanni Fiore tries himself, the pass on Johan Södergran would have been the better option.

29.: Steffen Baumgart would certainly have a tactical idea ready. The coach of 1. FC Köln is a confessed polar bear fan and is now spotting in the stands.

29.: Powerbreak! Time for the teams to think about how to crack the opponent.

29.: Again and again Hördler tries to help at the front. The end of the end is not a hold.

27.: It is currently much louder in the stands. You can feel that this is a slightly tricky phase for legs.

26.: After a puck loss from Konrad Abelttshauser, the polar bears can switch quickly. Frank Hördler is played on half -left and pulls off directly. Henrik Haukeland is there.

25.: deflected distance attempt by Eric Mik. However, since the dominant initial phase, the hosts have not succeeded in building pressure for a long time.

24.: The duels have been led significantly harder since the break tea, often take place in the gang.

23.: lots of space on the ice. So it gets expensive to steal that the home side only free themselves. Austin Ortega follows and pushes the slice past right.

22.: away from the event MacWilliam and Clark do not quite agree. Well seen by the referees.

21.: The middle section is running! Zach Boychuk turns up again immediately and grabs the puck.

Third conclusion: The first third of the third game is again highly attractive and balanced. The polar bears caught the better start and took the lead in the power play by Zach Boychuk. Munich surprisingly struck Zach Redmond immediately, from then on both teams had their chances. There is no trend for the further course of the game.

20.: 15 seconds before the end, Austin Ortega starts again. Frans Nielsen can only keep up with difficulty, but get the racket in between with one hand!

19.: Munich is currently not on clear occasions, but makes the somewhat more alert impression in many scenes. The red bulls are also ahead of the bullys.

18.: Morgan Ellis with two attempts! Strong from Haukeland, especially how he is on the spot again for the margin.

17.: A lot of fighting in the gang before Leo Pföderl fuels in front of the box and ensures chaos. However, the conclusion is missing.

16.: good power play, but an even better outpower game of the hosts! According to Schüusen, it is now 20: 7 for Munich, but most of the attempts were not too dangerous.

15.: Munich acts very organized in outnumbered, the disc runs well. However, Berlin holds the dangerous zone in the block.

12.: You have to be called Zach to develop the last punch today. So far, Boychuk and Redmond provide the crucial moments.

11.: The polar bears become stronger again. This time Zach Boychuk gives way to the right and forces Haukeland to the next parade.

9.: Munich actually plays a three-against-two situation excellently. Patrick Hager and Justin Schütz put on a lightning -fast double pass on the right, but Mathias Niederberger can parry the end of Schütz. 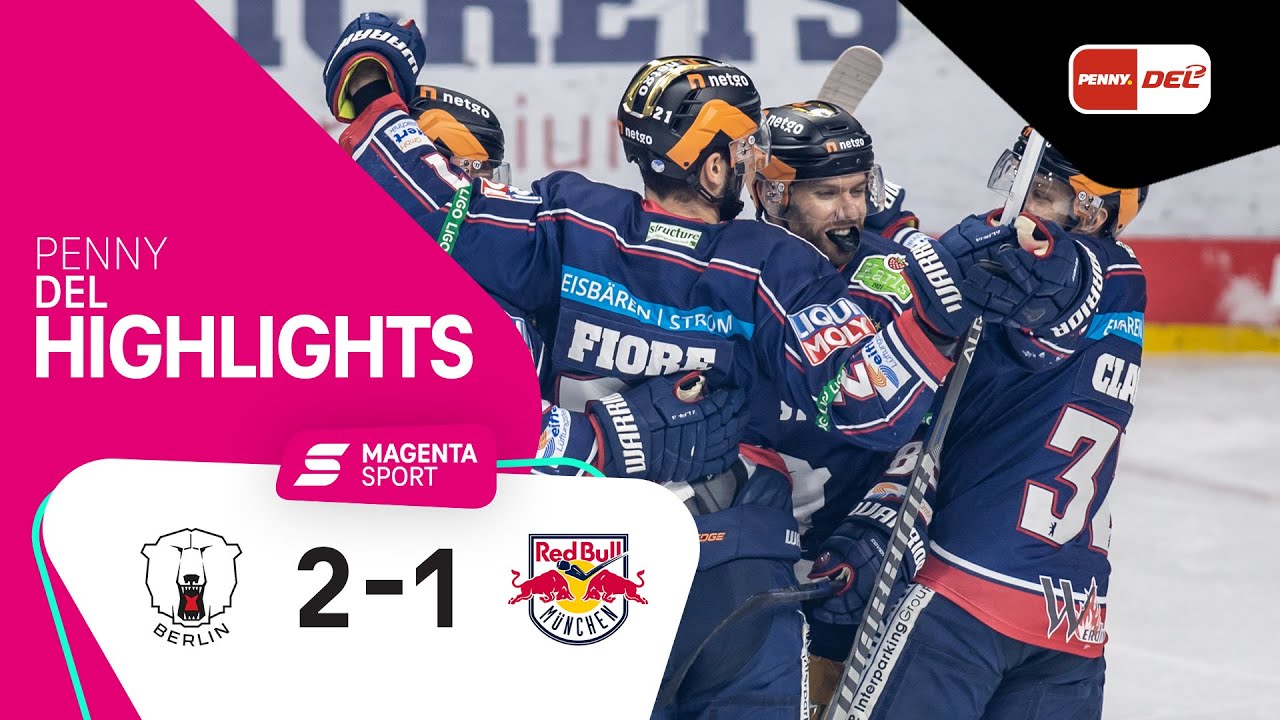