All GTA V online helicopters: tricks, which are the best and how much will cost you to buy them

The helicopters are the most versatile vehicles of GTA V and GTA online: they allow you to take off and land almost anywhere, fly quickly and remain static in the air when you need it. The hunting Hydra and the OPPRESSOR MAIN also allow it... but are isolated cases and are not helicopters.

Then I tell you how to get a helicopter for free in the story of GTA V and which are the best of GTA online , including their exorbitant prices.

Helicopters in GTA V: The best way to move

Let's start by the beginning. GTA V (campaign) has a series of tricks with which to invoke vehicles, weapons and change aspects of the world. You caninvoke a Buzzard helicopter * using the following commands according to the platform:

Solved the matter in the story mode, we go to GTA online. What are all helicopters? What are the best, and how much do they cost?

Description *: A classic in GTA. Es of the army. It is a beautiful machine. Sexy., Yusuf Amir. Armament : machine guns and launches guided or manuals. Performance : Great maneuverability, a small size and an average defense. It is the most balanced and versatile helicopter. It has the capacity to take a co-pilot and two passengers. * Price and store : $1,750,000 in War stock Cache & Carry. You need level 52. An armyless version is available.

Description *: Soviet military helicopter based on the thousand Mi-24 Hind. As a Russian politician, he refuses to give up regardless of the age he has or how many people campaign for his dismantling_, official description. Armament : Front machine gun yak-b 12.7mm of four cannons and four launches on guided and manual sides. PERFORMANCE : It is similar to Buzzard, although it has more shooting cadence. His mobility is medium, but he compensates for him with his firepower. He has the capacity to take a gunner and two passengers. * Price and store : $1,950,000 in War stock Cache & Carry. You need to overcome the preparatory mission of Pacific Standard, convoy.

Description *: Famous military helicopter in the franchise for having resembled in Vice City, San Andreas, Liberty City Stories and more. The Hunter is basically a flying tank that can sustain both damage and out. Solve that unpleasant divorce or border dispute with style official description. Armament : Mini-Metralleta that automatically points to a target and missiles on its guided and manual sides. PERFORMANCE : It has exceptional maneuverability both to move in the air and to ascend and descend. It is possible to perform acrobatics easily. It has the capacity to carry a gunner. * Price and store : $3,100,000 in War stock Cache & Carry. You must overcome 42 air cargo missions.

Description *: Sparrow is a version similar to Buzzard, although of a smaller size. The two are the most used gta online helicopters to make missions above all the military. Armament : machine guns and two launches to guided and manual sides. The countermeasures were added as part of the Criminal Enterprises update (PS5). PERFORMANCE : You are the fastest and most maneuverability helicopter from all GTA online thanks to the fact that it has very little fuselage. The problem is that it is very easy to receive damage from outside and that it has little resistance. Price and store *: You must acquire the Osaka at ** War stock Cache & Carry for 2,200,000 dollars + landing zone and Sparrow for $1,815,000 + 240,000 dollars for the customization of the armament. You can also pay $1,815,000 for the Sea Sparrow, a civil helicopter that can land in water. 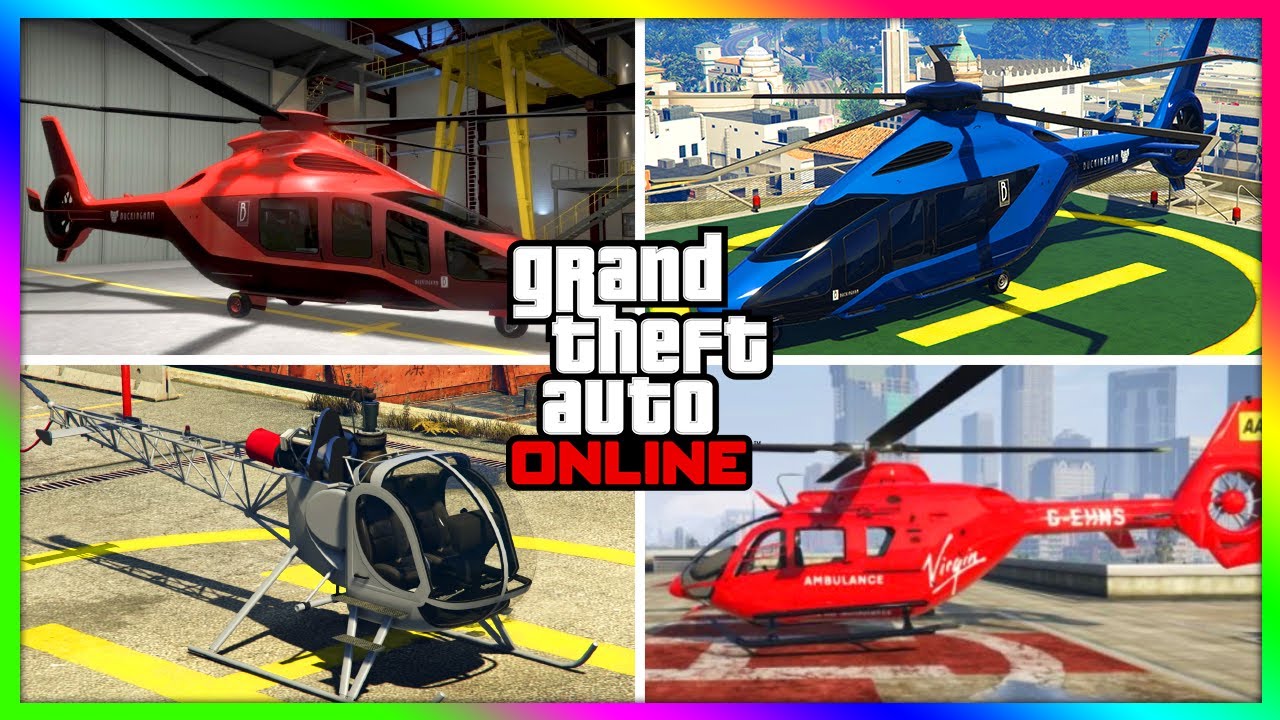 Description *: The Tulsa is technically a V/STOL plane based on the Grumman G-21 Goose, but can be used in a helicopter mode thanks to its wings and mobile propels. It is a military vehicle dedicated to transport, extraction and support of colleagues. Armament : It has a machine gun in El Morro, a turret mounted with great caliber in the rear (individual or dual of the 50-caliber and rotary machine gun 7.62 mm) and explosive, incendiary, gas or smoke pumps. It has smoke countermeasures, flares and anti-re-. You can withstand two self-guided missiles before being destroyed with a third party. PERFORMANCE : The Tulsa is a vehicle with a medium-low speed, but has the best mobility of all GTA online, since it can become a plane-helicopter at any time, allowing it to land on any side, earth or Water vertically or horizontally. It has capacity for 5 people (pilot included). * Price and store : 5,173,700 dollars or $3,890,000 in War stock Cache & Carry when completing 21 air cargo missions.