At the end of the first stage there was no way around Caleb Ewan in the sprint. The favorite from Australia confidently prevailed in Meiningen in the final sprint in front of the Italian Jonathan Milan. Max Kanter took third place ahead of Felix Groß on the 171.7 km long stage started in Weimar.

It was a very sweet victory after a few average months. My team never lost trust in me, said Ewan. At the Tour de France, the little sprinter had a lot of falling luck and missed a stage win.

There were no changes in the overall ranking. Second driving world champion Filippo Ganna is two seconds ahead of the Dutch construction Mollema. Milan is now third, defending champion Nils Politt is fourth three seconds behind Ganna.

The Cologne team has good chances on Friday to take over the red jersey of the leader. On the 200.7 kilometers from Meiningen to Marburg, two climbs must be mastered on the final round, which is why sprinting on the classic profile is unlikely.

outliers do not get through

Shortly after the start in Weimar, a top group of four formed. Ganna's INEOS team initially had no interest in persecution and left the quartet on the hilly journey through the Thuringian Forest a lead of a little more than four minutes. Only then did Egan Bernal take over the instruction work and the lead melted.

Bernal would actually be the star of the tour. But for him the Germany tour is only the second race after his life-threatening fall in January. I want to drive as many races as possible and collect kilometers. I am very happy to be back after I was almost dead, said Bernal. The 25-year-old had ranked 73 at the prologue in Weimar, on the way to Meiningen he lost the connection to the field at the final round.

Bernal had rushed into a standing bus in January in his Colombian homeland in training at high speed. The tour winner from 2019 suffered more than 20 broken bones and was in a coma for three days. He still feels the consequences today. There is a lot of metal in my body. I'm like Robocop, said Bernal. He hoped to have another normal season next year. 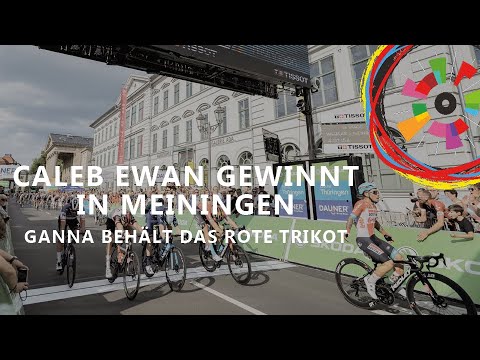 Until then, he just enjoys being there again in the cycling circus. At the end of June, the climbing specialist had traveled to Denmark before the start of the Tour de France to feel the racing atmosphere. I just wanted to be with the boys. That made me very happy, said Bernal. Top results can only be expected from him in the coming year.

Labels: Ewan in the sprint Team